Helicopter SRC Mi-14 Afalina – is specialized search and rescue complex created for ensuring high efficiency of search and rescue works at the sea and on the land, day and night, in any weather conditions, for the purpose of rescuing people suffering disaster.

The Mi-14 helicopter can sit down and fly up, in the regular mode, Both from the land, and from water. Keeps water landing After steady excitement situation at 4 – 3 points and can glide with a speed up to 60 km / h.
The fuselage of the helicopter is executed on the amphibian type. Landing to the water surface is carried out in the regular mode for rescuing people suffering disaster in the educational purposes and in emergencies.

Essential difference of Mi-14 from other helicopters, such as Mi 17, Mi 8 and Mi 171, is universality of the steering screw by means of which both air, and sea maneuvers, including turns afloat are carried out.
The helicopter can make towage of lifeboats (rafts), it is regularly equipped with system of towage, the winch, coupling knot, cable cutter.

Flying range of the helicopter, more than 900 km. The lower part of the fuselage is executed in the form of the boat. The space in the boat allowed establishing the increased fuel tanks. When carrying out modernization, the increase in tanks for flights on distance more than 1100 km is possible. Thus the salon of the helicopter remains free for placement of victims, freight or passengers.
The helicopter is equipped with the emergency fuel system plum. The system of emergency fuel plum increases safety of flights over the sea at failure of one of engines (for example, at a full load of victims) if horizontal flight of the helicopter is not provided with one working engine (reduction of flight weight for the account fuel plum.)
The helicopter is supplied with big movable doors from both boards. Width of a side movable door on the left board is twice increased (1,4 mx 1,7 m). It gave the possibility after taking the victims on the level of a door to bring them in the helicopter turn of an arrow of the winch. Such cargo door, also facilitates possibility of loading of the helicopter large-size freight (pallet equipped.)
The helicopter is equipped with the powerful SLG-300 winch with a sliding arrow and triple “scoop” that allows lifting aboard at the same time the rescuer and two victims for shorter time. 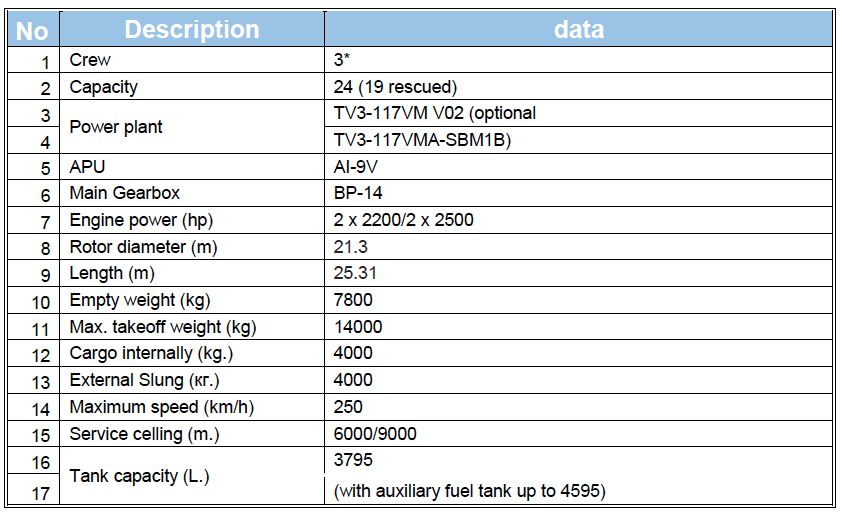